As an artist with professional training, I teach the various art techniques that I have become proficient at to novices and advanced students alike. My courses are very reasonably priced. My studio houses a large printing press and classes include inks, painting materials, brushes or other tools specific to the midium. 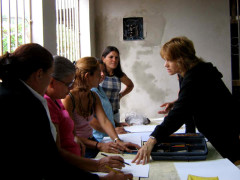 Courses for beginners through advanced...

The first lines are always the hardest to draw, but with time and lots of guided practice, it gets easier to draw a clear picture on a piece of paper. Contact me to find out how!

With my access to a well equiped printing workshop, instruction in any of the printing technique listed bleow is also possible.

A glossary of Print Making Techniques: For your understanding...

•    Aquatint - Printing Technique capable of producing unlimited tonal gradations to re-create the broad flat tints of ink wash or watercolor drawings by etching microscopic crackles and pits into the image on a master plate, typically made of copper and zinc. The majority of Spanish artists Goya’s (1746-1828) graphic works were done using this technique.
•    Collograph - Printing technique in which proofs are pulled back from a block on which the artwork or design is built up like a collage, creating a relief.
•    Drypoint - Printing technique of intaglio engraving in which a hard, steel needle incises lines on a metal plate, creating a burr that yields a characteristically soft and velvety line in the final print.
•    Engraving - Printing technique in which an intaglio image is produced by cutting a metal plate or box directly with a sharp engraving tool. The incised lines are linked and printed with the heavy pressure.
•    Etching - Printing technique in which a metal plate is first covered with an acid-resistant Material. Then it is worked with an etching needle to create an intaglio image. The exposed metal is eaten away in an acid bath, creating depressed lines that are later inked for printing. This technique was thought to have been developed by Daniel Hopfer (1493-1536). Etching surpassed engraving as the most popular graphic art during the active years of Rembrandt and Hercules Segher in the 17th century, and it remains one of the most versatile and subtle printing techniques today.
•    Iris or Giclee - A computerized reproduction technique in which the image and topology are generated from a digital file and printed by a special ink jet printer, using ink, acrylic or oil paints. Giclee printing offers one of the highest degree of accuracy and richness of color available in any
•    Mezzotint - (mezzo = half and tinta = tone), a reverse engraving process used on a copper or steel plate to produce illustrations in relief with effects of light and shadow. The surface of a master plate is roughened with a tool called a rocker so that if inked, it will print solid black. The areas to be white or gray in the print are rubbed down, so as not to take ink. Messotint was widely used in the 18th and 19th centuries to reproduce portraits and other paintings, but became obsolete with the introduction of photoengraving.
•    Monotype - One-of-a-kind print made by painting on a sheet of metal or glass and transferring the still-wet-painting to a sheet of paper by hand or with an etching press. If enough paint remains on the master plate, additional prints can be made, however, the reprint will have substantial variations from the original image. Monotype printing is not a multiple-replica process since each print is unique.
•    Xylography - The art of engraving and making black and white or color prints from natural grained wood or board with carved pattern.
•    Enhanced - The artist goes over the edition repainting or touching up special areas.
•    Edition - The authorized number of impressions produced. The edition includes all numbered pieces, artist’s proofs (a.p.) hors de commerce examples (H.C., i.e. outside of usual commerce) and printer’s proofs (P.P.).

Do you want to know more about what's available and how I work?

Please fill out this form to contact me and I will get back to you right away. If you'd like me to call you on the phone, simply supply me with your phone number, extention and best time of day to call, for your convenience.

Lorena Villalobos is among only twenty-six Costa Rican artists listed under the heading, Modern and Contemporary Masters, on page #233 of the important new book, Central American Modernism by Ford and Snider, 2018. Available on Amazon or directly at:

I am presently not offering new art courses but if that is your interest, please contact me. I do sometimes give private instruction if we can work out the time.

You can take a look at some of my new work during my current exhibition always listed at the top of the NEWS page of this website.

What about cost? How much can you expect to pay to own one of my artworks?

I am pleased to present you with a sampling of my work on this website! Basically, the amount you can expect to pay for my pieces varies according to the particular medium and size. As a general guide, you can figure that my prints (unique, single process to enhansed or mixed) are priced from $150 to $1800 and my oils on canvas are in the $1500 to $4500 range. 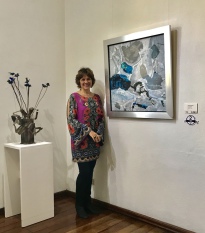 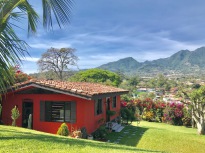 Lorena's Studio in the hills of Escazú, near San José Costa Rica. 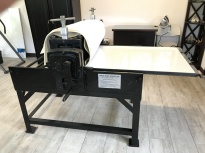